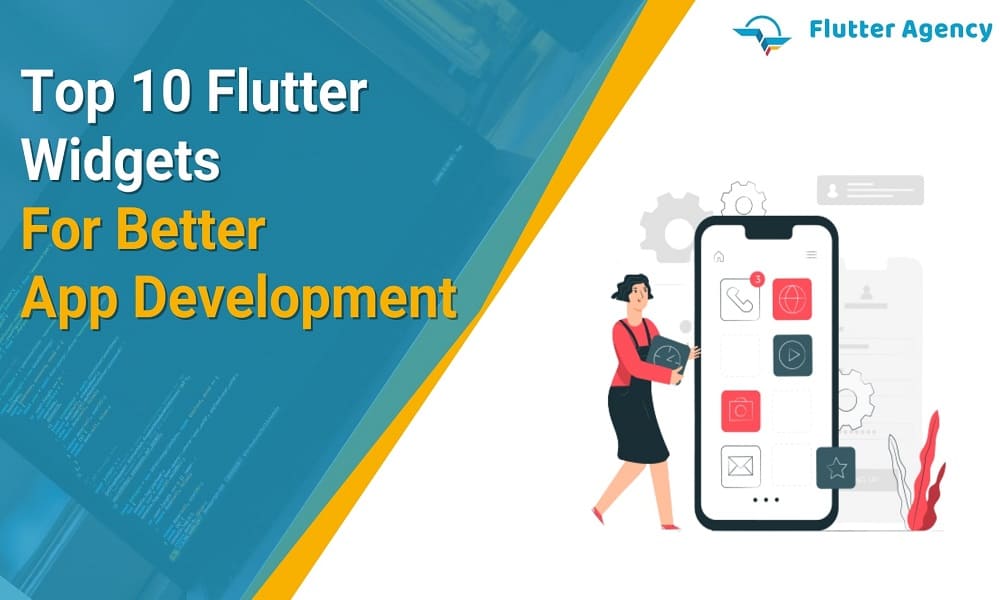 It is challenging to imagine, But it is possible to have the Flutter applications without coding! Are you thinking about how? Then the answer is Widget. Flutter has a rich set of widgets, which makes them more sustainable. You can use Flutter widgets to create high-quality web, mobile, and desktop applications.

Flutter widgets are well-known because of their highly customizable and provide extensive flexibility and fluidity, which is perfect for any mobile app type. Flutter UI widgets are optimized for their high performance. These widget elements are organized in the form of a widget tree. It will describe the process of the frontend native apps screen, and the central part of Flutter widgets is its configuration and the widget state.

What are Flutter Widgets?

Flutter is the mobile application development platform and the ecosystem for cross-platform app development. The main component of Flutter is a library of widgets, the set of building blocks that enable the creation of engaging and appealing app user interfaces.

Instead of coding for UI, you can use Flutter widgets to help you construct your app’s layout. In the Flutter widget, everything is nested inside each other. Also, Flutter widgets are the same as web UI elements of HTML divs or CSS classes. A ready-made widget is used to create your app’s UI, like buttons, tables, and text fields.

In Flutter, there are two major types of widgets:

Depending on these two types of widgets, we have categorized 14 different widgets in Flutter, which are:

However, you may have seen that each of these widgets has functional integration in mobile app development. Also, the Stateless vs stateful Widget is the debate topic. Let us see the great Flutter widgets.

ConstrainedBox is the in-built Widget that is present in Flutter SDK. The primary use of this Widget is to add limitations in the size of the child widgets. The developers can add flexibility concerning the height and width of the child widget.

However, a widget has restrictions when the child’s more prominent in size than the container. It will cut down a child’s view and make the front end look out of line. Therefore, this issue is solved by not defining the maxHeight property and adjusting it to by default value of double. infinity.

SafeArea is an excellent widget for creating a dynamic and adaptive UI. This Widget supports adjusting the screen with multiple devices that vary in height and width. It helps to overcome the area constraints induced by a status bar, navigation bar, etc. Safe area widget integration did not allow the design to overlay any areas with a frontend UI visibility constraint, making them error-free.

Hence, a safe area Widget is referred to as a padding widget because it adds padding to an android or iOS app whenever there is a constraint.

It is the animated Widget utilized for animating a tabbar and moving it as per the theme.

FittedBox is the responsive Flutter widget. It will help you in inducing responsiveness to the single child assigned to it.

You must include the Row widget as a child in a specific FittedBox widget. The Row widget itself has two containers as the children. In that case, a second child will overflow to the one side, But this problem has been solved with the Fitted Box widget.

An opacity widget is used to make the child inside a container transparent. It will temporarily change a child into the intermediate buffer and make them transparent.

Hence, the remaining space is rearranged, or you can keep it empty.

In the Flutter, a wrap widget is used to wrap children horizontally or vertically. For instance, if you have several widgets and want them to use them in a row or a column, then you can take the help of a wrap widget to prevent the data from getting clipped.

You can give the name in any direction, i.e., horizontal or vertical, depending on the front end that you require in your application. It will also aid in defining a space between the two widgets.

An Arc Text widget will help you simplify the task of writing a text’s code and the content available over the arc shape.

You can set the various angles and define the content you require around the circle, which is impossible to do without Flutter code.

This Widget has been great for the developers as it has ended the hassle of developing the custom number pad in the application. You can use a Numeric keyboard widget with no iOS or Android package.

This Widget will play the role of a pipe that will get the entered data from one end and release it from the other end.

This blog has helped you in many ways as you get the essential list of Flutter widgets. For any development of the Widget or custom mobile app development services, you can directly connect with us. Our Flutter experts will get back to you in a short time.

1. Why is everything in the Flutter widget?

Widgets are just small chunks of UI which you can merge to make an entire app. Creating an app with Flutter is like developing a lego set piece by piece. Widgets are nested internally with each other to develop your app.

A stateless widget will describe a part of the user interface by creating a constellation of other widgets which will define a user interface more concretely.

3. Why is the Flutter widget immutable?

Immutability in Flutter is utilized for performance. If the Widget requires changes, you must create a new instance. It is easy to check cases if they are identified as the same state. Due to this, a const is used most often.