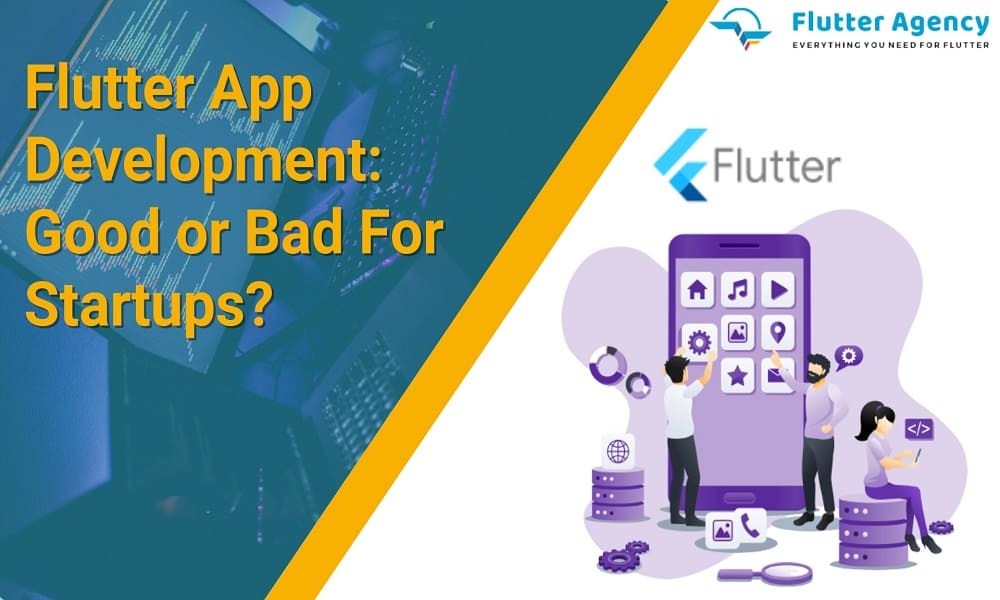 Are you planning to introduce the mobile application in 2023 but need clarification about which cross-platform framework is best? Then here is the answer.

Flutter is the ultimate app development framework for startups who want to roll the feature-rich apps without spending many resources.

Let’s briefly see Flutter for startups and why it is preferable for cross-platform app development.

With fast-evolving trends and increased competition, it isn’t excellent for startups to thrive in the highly competitive marketplace without app development.

Flutter is the Software Development Kit (SDK) that works across the platform to build mobile applications. It is also referred to as the UI framework, which collects UI elements, makes the app, and is customized throughout the development process.

Flutter is the UI toolkit of Google to make natively compiled apps for web, desktop, and mobile from a single codebase.

Flutter’s open-source framework for app development gives much speedier development across various operating systems with the Flutter 3.3 features. The tagline says,” Build great native apps in record time.” It delivers the interactive UI that permits to design of the app per the user’s needs and demands.

A Complete software development kit (SDK) solution has everything essential for smooth cross-platform app development. Flutter for app development will give robust, high-performing, scalable mobile apps with just a single codebase for all OS. Hence, it provides the best icon, scrolling, and typography, and due to this, many startups can begin app development using this platform easily.

Let us look at some of the stats and see why it has gained so much popularity.

How to Make An Ultimate Business Plan For Mobile App Startup?

The world is overwhelmed with ongoing digital experiences and applications, which are a fundamental part of living. Cross-platform app development makes sure that your idea is unique. For startups, creating cross-platform mobile apps is budget-friendly and convenient. Hence, the new apps made with Flutter are excellent in many ways:

Flutter architecture technology is the deciding factor. Skia in Flutter is everything you need for mobile app development. You would not need any external bridge linking via native components, as the Flutter framework compromises everything within its framework.

Flutter framework has a friendly IDE for the setup of Android and iOS. It has the CLI tool known as the Flutter Doctor, which aids developers in setting up an environment for the development services.

Flutter framework for startups has massive documentation for testing the apps and Flutter widgets along with innovative features.

Mobile app development uses Flutter to make it easy to release the app across an app store and play store within the development. You will get the CLI interface that speeds up the procedure of releasing an app efficiently.

Once a cross-platform app is released, it is necessary to maintain it. Flutter gives CI/CD support and a CLI interface and documentation support.

How To Choose The Right Web Framework For Your Website

What features of Flutter app development will make it the perfect choice for startups? As it is scalable, cost-effective, and robust for startups.

Mobile app development is expensive, followed by support and maintenance services. Startups with a limited budget utilize Flutter as it has SDKs that give different ways to reduce costs. It speeds up the mobile app development process and reduces the production cost by creating a great UI and smooth animations of the App.

The help of advanced technology, design, features, and advantages of Flutter makes it the perfect choice for startups. With this, programmers can give high-performing applications.

Let’s look at some of the best features which make Flutter preferred for the enterprise:

The Hot Reload in Flutter feature will help you to stand out in the crowd. This unique feature allows developers to experiment, design UI, and debug the app in real-time. This feature immediately reflects all changes in coding, so you do not have to save to view the changes. It reflects the updates in the app’s current state and allows the developers to continue to execute the code to finish the project.

Flutter is a fully open-source platform for development. Besides the complexities in the project, developers make the apps workable by adding a vast selection of material designs like motion APIs, natural and smooth scrolling behavior, Cupertino widgets, Text widgets, etc. Hence, developers can get a myriad of design options.

Mobile app performance is the most significant concern for a business. And top Flutter widgets ensure to give the native performance of an app. The broad catalog of widgets has scrolling, fonts, navigation, and hassle-free assessment.

For startups, mobile app development as it permits you to make apps for iOS and Android. Flutter is not dependent on any JavaScript as developers can write a single codebase for creating cross-platform apps which perform closely like the native apps when it comes to the UI/UX, features, and functionality.

Let’s see some of the reasons below:

So, now we can conclude that Flutter is the perfect choice for startups who want to build their own mobile application.

Several million startups are coming into the market every year, and it is challenging to stand among them in this competitive market. If you want to build your own flutter app, hire flutter developer to build a scalable and reliable flutter app for your business. Flutter Agency has identified its potential and recommended that all startup businesses establish their brand quickly. Hence, it is the perfect choice with its extensive features.

1. Do Startups use the Flutter framework?

Flutter’s productivity is excellent, with reduced costs, making it the perfect choice for startup app development. Flutter framework supports IDEs such as visual studio code, Xcode, and Android Studio. Flutter has an organized and portable GPU-executing UI that provides smooth and scalable performance.

2. Why is Flutter considered better than the other frameworks?

Flutter needs less code for development. It has a simple, easy, and convenient platform and beautiful widgets that give a high-quality performance level in less coding. Code reusability is another vital feature of Flutter.

3. Which server is best for Flutter?

Firebase is a Google-powered backend service that will work perfectly on the server side. It gives several development tools used in mobile and web app development. It is known for the JSON-enabled NoSQL database stress and syncs the database in real-time.