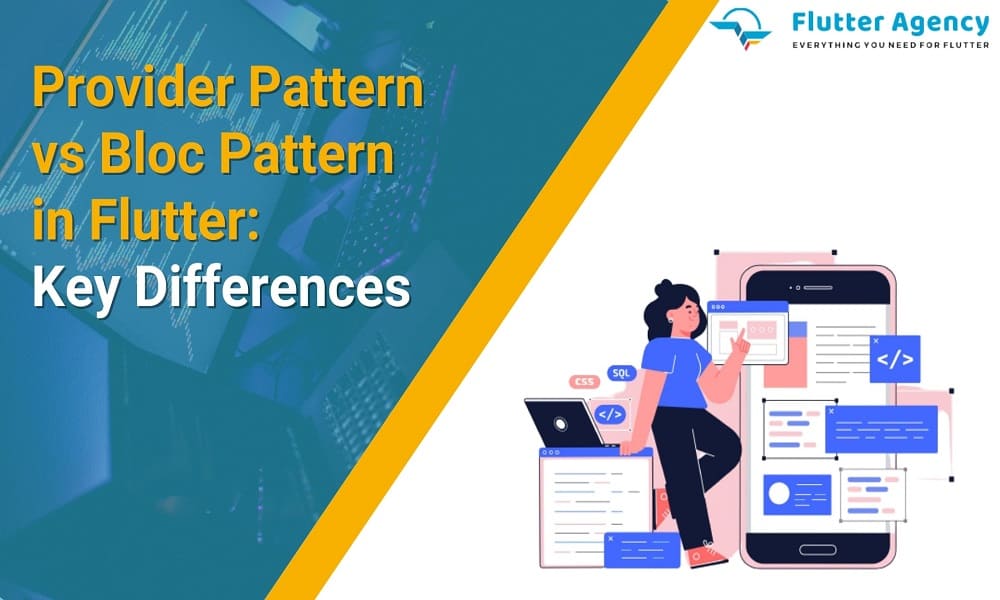 Programming can be done in a variety of ways to get the same result. How effectively the feature is finished depends on how competent the coder is and how well their approach works. In Flutter, there are numerous state management techniques or programming models.

These include the Bloc, Provider, and Scoped Model patterns, as well as the function setState(). In this article, we’ll look at the Provider & Bloc patterns to see how we may create a login page with the required validations.

What Is State Management?

The data that is displayed needs to be managed when front-end software is developed. According to the events that are run over the UI elements, it occurs. For instance, the value of a text field might alter when a button is pressed.

Therefore, we must handle that value upon change detection. In other words, we have to manage the state of the input field. There are various state management techniques in Flutter.

To compare various state management strategies, we require assistance. Which pattern is best for effectively completing the use scenario will depend on the programmer’s capacity to evaluate knowledge.

How Is the Provider Pattern Used?

When utilizing the provider pattern, you should be aware of the following three things:

ChangeNotifier is a class that other classes can extend to send a notification when a change occurs in the class’s data.

ChangeNotifierProvider would be a parent widget with a link to ChangeNotifier, which presents modifications to ViewModel class data in the user interface.

A widget containing a connection to a ViewModel Class may be considered a customer. This widget constantly monitors for changes and replenishes the child widget that has been encased around.

Overview of The Bloc Pattern

Bloc is formally known as a Business Logic Module. In other words, we have two groups: one has all the UI elements to display on the front end, and another is the Bloc class, which includes all the business functionality and data processing code so that it can be given to the Screen class to display. Whatever is necessary.

We must display the date using the official structure chosen by the company. To format the date, use the Bloc class. The Bloc class instance will be shown on the panel on the front end to generate the time in the attribute. There is no need to change this further.

We will create the Bloc Pattern with the same features to understand how Validation functions on the login screen.

What Conditions Must Exist While Tackling the Bloc Pattern?

The sink is used when the data’s worth changes due to user interaction or some other event, whereas the Stream, is used to monitor the change.

The Flutter widget StreamBuilder rebuilds the child panel after an event by listening for changes in the Stream.

With StreamBuilder, the widget is rebuilt after each change by listening to the streaming and fetching the model. However, as soon as notify listeners () in the provider module runs, the Consumer starts to listen.

Who Needs to Utilize Flutter Bloc?

Now that you understand how the Flutter bloc module works.

For most Flutter apps, Flutter bloc becomes a way to go. It fixes the Provider’s absence of event-based state management. Its toolkit is comprehensive, enabling the use of both straightforward and complicated applications. These benefits justify the challenging learning curve.

The details shown above adequately demonstrate that the two designs differ significantly. BLoC effectively separates the display layer and business logic. Better testability and reusability result from this. Writing more code than those in Provider is required to address basic scenarios. When you are aware as the application’s complexity rises, this Flutter design will become more valuable.

The Provider also effectively isolates UI from functionality and does not mandate the generation of distinct states with each manual intervention. You frequently only need to write a little code to address a straightforward situation. But in increasingly complicated situations, this might become problematic.

Want to develop industry-leading mobile apps in Flutter technology, then hire Flutter Developer from us to avail the best-in-market mobile apps. But if you are still confused and want a clearer idea about a Flutter framework, then you can read our Blogs!

Top 10 Most Popular Flutter Packages in 2022

1. What is the difference between the stream and sink in the BLoC pattern?

A difference between the stream and sink is that BLoC has two simple components: Sinks and Streams. The input of BLoC is the sink, and the output is a stream. However, user inputs are provided to the BLoC by adding the data to the sink, which means the business logic is in the block which processes the data. Hence, it will notify the widgets listening to streams with the processed data.

2. What is a provider in Flutter development?

The provider package is the easy-to-use package which is the wrap around the InheritedWidgets that makes it easier to use and manage. It gives the state management technique, which is used for managing some data around the application.

3. Should I utilize the BLoC pattern?

Bloc is a great pattern that is suitable for almost all types of applications. It will help improve the code’s quality and handle the states in the app more manageable way. It is complicated for those who begin with Flutter because this pattern uses advanced techniques such as stream and React Native programming.