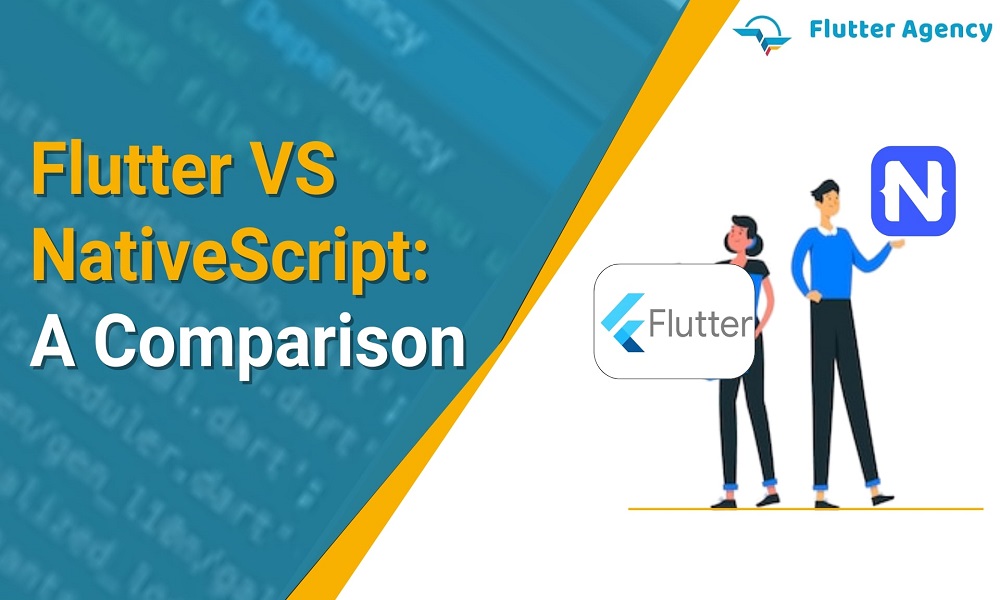 Furthermore, these frameworks help to develop high-quality apps faster. It makes it easy to code, improves performance and will increase the number of users for your app. It also allows you to save money by deducting the number of hours you require to spend on your app.

Additionally, you get the ability to customize it as per your needs. It leads to an increase in the number of app downloads. However, companies are generating more revenue and have increased their brand visibility.

It seems to be challenging to hire the correct developers for your business. It also creates confusion between Flutter Vs. NativeScript for the development. So, we have written this article to differentiate both these frameworks in detail.

Flutter is an open-source framework released in 2018 by Google for developers to create high-quality performing apps in various operating systems, which includes iOS and Android. It makes use of the Dart language for programming. Flutter facilitates you to create modern, performant apps by reusing the code. So, instead of plumbing, you can focus on the coming.

An emerging Flutter framework supports the various technologies from the web to native, allowing you to create an app the users want. Moreover, Google’s brainchild made constructing complicated and high-quality apps easy without worrying about a platform.

NativeScript is another open-source, cross-platform framework that enables the development of genuinely native mobile apps with JavaScript from 2014. On the contrary, other frameworks use Cordova rendering, but NativeScript has a rendering engine that renders a native-like user experience and performance.

In addition, it provides direct access to every native platform API by using TypeScript, Angular or JavaScript. Therefore, the developers can benefit from web development skills to build a native mobile app. Also, it offers a wide range of templates and plugins, which will smoothen the app development process.

NativeScript offers functionality such as the integration of Angular and Vue.js, native-like performance, XML for platform-independent UIs, and code reusability, which make it popular and well-known among businesses and developers.

Comparison Between Flutter Vs. NativeScript

Let us see some differentiation between Flutter vs NativeScript.

We have only compared some essential aspects of Flutter vs NativeScript. But, after reading the article below, you will know whether to choose Flutter developers or a NativeScript developer for your next project.

Performance comparison of Flutter Vs. NativeScript

The performance characteristics of Flutter and NativeScript are superficial when you compare both platforms side-by-side. NativeScript is faster, but the Flutter app development is preferred more for mobile apps. The other benefit is that it uses the resources of a host device. In other words, it also works on the hardware and is optimized to use system resources as is possible on the platform.

Flutter uses the hardware-accelerated Skia 2D graphics engine for rendering. Besides that, its goal is to offer 60 to 120 frames per second performance on gadgets that have a capacity of 120Hz updates.

NativeScript apps have an impressive performance and maintain about 60 FPS without any issues. It takes time in front-end development but provides better performance and speed. Lastly, combining the manual and instrumental tools can help optimize and improve performance.

The architecture of Flutter Vs. NativeScript

The highest level of the root functions or the platform-specific widgets comes first in the hierarchy of apps developed with Flutter and then comes basic widgets. Hence, Flutter is a practical choice for building small to large-scale applications. It becomes possible with the architecture, which permits you to use simple or complicated components as required.

NativeScript, like other frameworks, is created on several modules, each with its functionality. It has several plugins and customization features as this framework is MVC friendly which authorizes you to manage the modules well, which in turn helps the enterprise applications with some particular and unique features.

What can you create with the Flutter Framework?

What can you create with NativeScript?

Advantages and disadvantages of Flutter

What are the advantages and disadvantages of NativeScript?

Flutter and NativeScript are both frameworks that help you build cross-platform mobile applications. It has been clear how Flutter has gained popularity due to its performance, functionality, and single code base. On the other hand, engineers who know about JavaScript and its framework can go for NativeScript to get a start with native app development.

We recommend you consult the tech geeks who help you select the best. However, it is vital to analyze your requirement from the technical point of view to choose the right stack.

1. Is Flutter faster than NativeScript?

Yeah!Of Course. In terms of the development speed, deployment and debugging, Flutter is quick. It didn’t need any bridge for communicating with the native modules as it is a native component by nature.

2. What is the difference between Flutter and Native?

From the speed of development to deployment, there is a significant difference between the NativeScript and Flutter. The performance of the same apps created in both frameworks also varies.

Complex and advanced apps will work flexibly with the NativeScript framework. Hence, setting up the environment on this platform is much easier.