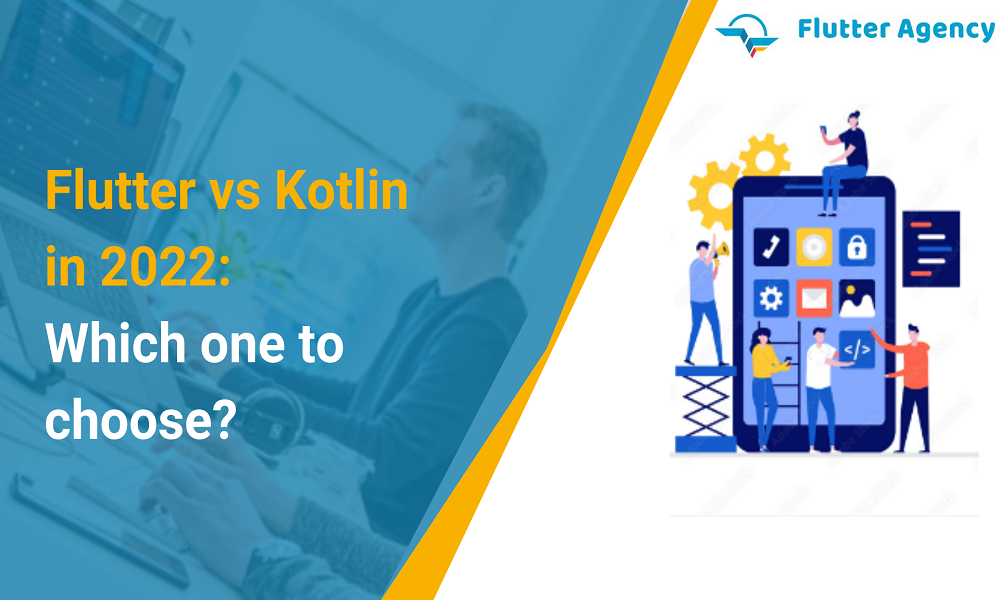 Cross-platform app development is an alternative to native development. The primary cause why it is growing in popularity is its quick time-to-market, cost-effective, and single codebase for multiple platforms. Nowadays, more organizations and developers choose the best framework and technology for their development within the budget.

Introduction to Flutter and Kotlin

Flutter is Google’s UI toolkit for constructing natively compiled, appealing, and feature-rich desktop, mobile, and web applications. You can also use the latest mobile UI design trends for development. It is the fastest-growing open-source community. Flutter programmers can create applications on Android, Windows, Mac, Linux, Windows, and the web from the individual codebase. You can recruit a trustworthy and reputed Flutter development company with Knowledgeable Flutter team or you can individually hire Flutter developer for your project.

Kotlin is the language developed by JetBrain for general-purpose programming. It is designed to interact with Java ultimately. Google mainly supports it as it is the preferred language for developing Android apps. It became famous when Google announced first-class support for kotlin on Android.

A comparison of factors of Flutter and kotlin is listed below

Flutter app development makes use of the Dart programming language. These apps are compiled directly into the machine code, resulting in fast apps. It is not dependent on the web view or the device’s OEM widgets; besides, it adapts the rendering engine to render every view component. A rich widget set consists of all the critical platform differences like icons, font family, scrolling, and UI-related elements. It will aid you in gaining native-like performance on Android and iOS platforms.

Flutter delivers faster performance and aims to provide 60 frames per second (fps). A Flutter performance is usually measured by the UI of an app and how smoothly it works. It is because Flutter is the UI toolkit and targets the front of the application.

When we talk about performance, applications of Kotlin are faster and deliver better performance on all the platforms. Kotlin is one of the most robust and advanced platforms for implementing cross-platform apps.

Both the technology works well and gives the best performance, but it entirely depends on the functions and features involved in the application development.

Flutter is based on Google and is driven by a growing open-source community of designers, tech enthusiasts, and developers. It is booming in its user base and has been used by some reputed organizations worldwide. The Flutter community is constantly making efforts to make Flutter a high priority for creating a fast and beautiful user experience for desktop, web, and mobile.

Kotlin is a stable and mature language and one of the official languages for android app development, while Flutter is a new language in the market for app development. Kotlin is a rapidly developing language having a rich ecosystem and the fastest growing global community. JetBrains, one of the well-known software development companies, has made the tools for engineers and project managers.

Flutter’s user base includes firms like eBay, Google, BMW, Alibaba group, square, and many more. It is one of the most loveable frameworks by developers.

Kotlin is a universal language used by brands such as Zomato, Adobe, Pinterest, Uber, Udemy, Coursera, and many more.

Dart is very secure and has the same syntax as JavaScript; developers find it easy to learn.

The syntax of kotlin is brief and similar to other programming languages like Scala, Swift, Groovy, and Java. If the Kotlin developer comes from the background of Java, then it becomes easier to switch to kotlin. As it is a Java-compatible language, experts find it easy to use kotlin in new and existing apps.

A hot reload in Flutter permits quick experiments and changes, resulting in rapid UI development. It has a rich set of widgets, layered architecture, and complete customization with the Stateful Hot Reload, which aims to rapidly deliver a native-like user experience.

It seems that Flutter is a bit faster than Kotlin. However, Kotlin provides:

The coding speed is utterly dependent on the complications of the apps, but both platforms save time by using a single codebase for implementing the apps on both platforms.

Flutter needs to learn Dart, which is why developers must consider it a significant skill. It is also booming in the technical market, and many organizations are trying to adopt it in the future.

Kotlin is open-source software that is free to use. It is the ultimate of Android development.

When we communicate about cross-platform applications, UI plays an important role. The main objective of the cross-platform is to give a user experience that feels native. It also provides a unified experience on all platforms. Flutter is the toolkit of UI and takes care of each aspect of UI to deliver the native performance on iOS and Android via a single codebase.

Kotlin develops an accessible environment for creating the app’s user interface. It did not restrict any rules on how to build your app’s UI. It allows you to use native features whenever required or write platform-specific code.

When is Flutter Good?

Flutter is a cross-platform framework that saves your time and development cost. Flutter is the best option for developing MVP and prototype apps where the time and resources are fixed. It can be utilized by small, medium, and extensive business apps. It works perfectly when user engagement is the key to success, like online stores, business apps, and FinTech apps.

When is Kotlin excellent?

Kotlin was invented and maintained by JetBrains, which deploys many Java Products and has many developer tools. Kotlin has tried to overcome some severe drawbacks of Java, but it has a long way to go. The leading cause behind Kotlin’s popularity is the compatibility of Java. Experts can make use of their existing applications and cross-platform applications and are also able to write the server-side code in Kotlin.

It is a fabulous choice for beginning a new project in Android or can modify existing apps.

No programming language or framework is ideal; everyone has its benefits and drawbacks. Both deliver the best performance and save development time and cost significantly. Flutter is more well-known than kotlin as it is newly released in the market. If we take into consideration cross-platform development, both give native-like performance via a single code base.

Technology selection depends entirely on the project’s needs and other factors. This article lets you select the perfect technology for your development and fits your budget.

If you are interested in developing a mobile application. In that case, you can hire one of the leading Flutter app development company having a team of Flutter experts with years of experience. Feel free to contact us.

1. How is the cross-platform app beneficial for your business?

Cross-platform development permits businesses to integrate the apps faster than developing the application for only one platform. This strategy is cost-effective as it does not have to implement the two separate apps. With this, you can use a similar codebase on both platforms.

2. How does the stateful hot reload functionality in the Flutter development work?

Flutter’s stateful hot reload will preserve the state of your application. This access only allows you to see the effect of the recent modification without throwing away the constant state.

3. What is declarative UI in app development?

Declarative UI needs thinking about mobile app development from a new aspect. It rebuilds the elements of your UI from scratch instead of changing them. Modern CPUs are rapid enough to do so and also have the capability to handle the animations.